These are prototypes I made for game jams like the 48h Ludum Dare. I'm trying to get better at making new things from scratch fast and see where my game engine could do more to help me. 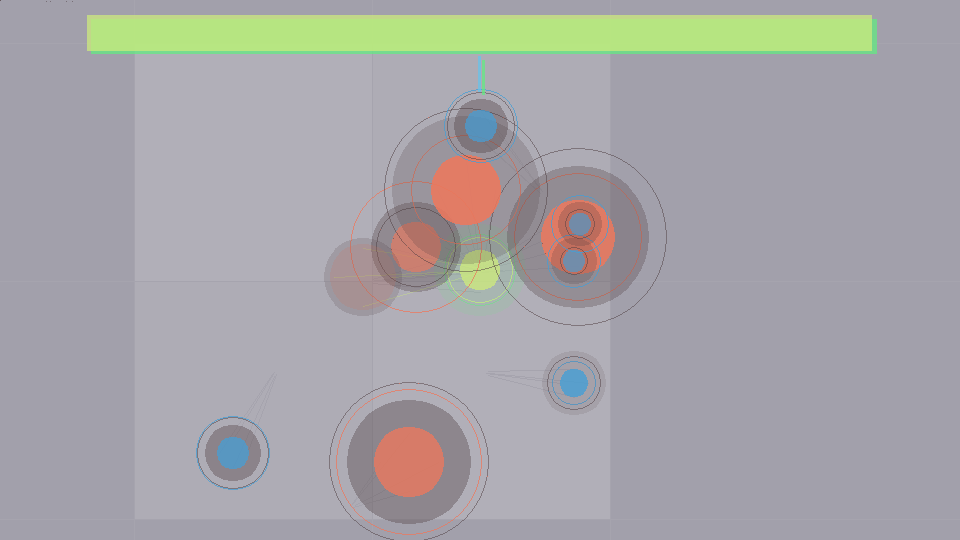 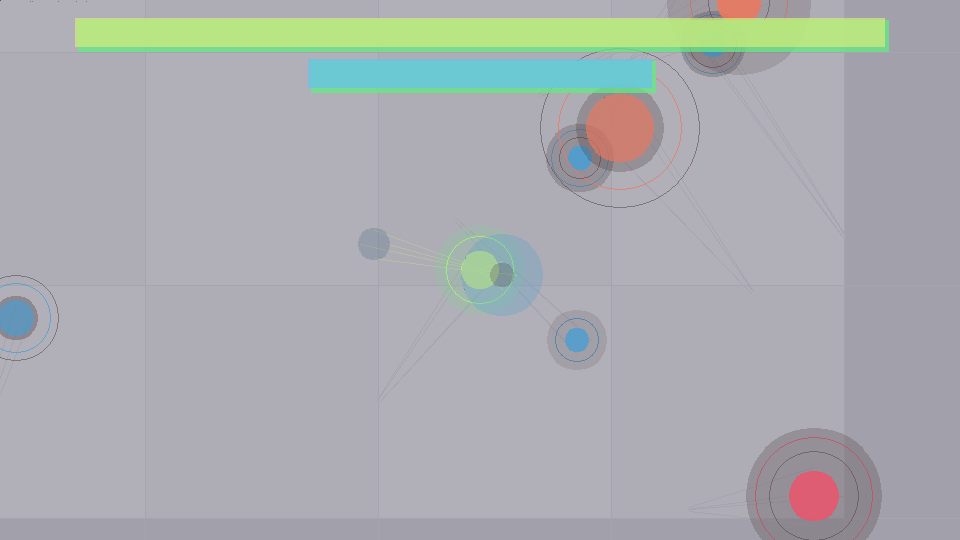 The theme was Keep it alive, I made a small abstract game where you need to keep your energy up by collecting orbs.

Stepped away from pixel art for this one, and had some fun animating geometric shapes. Nice not having to deal with any asset files!

#coffin-digital Prototype | Back to Top 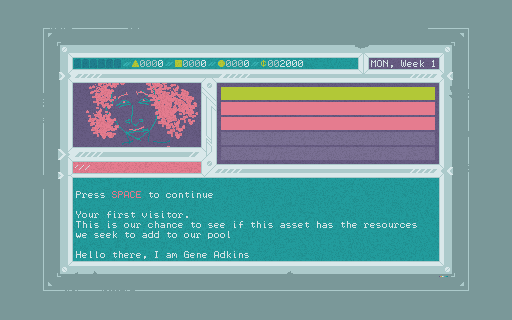 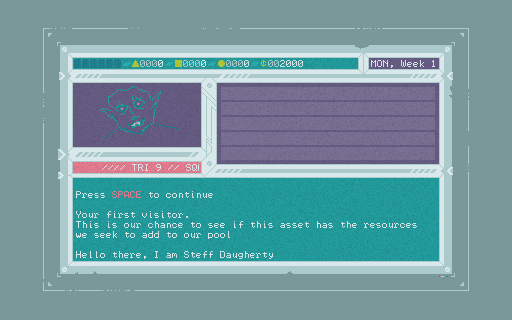 The jam theme was Your life is currency, and the idea behind Coffin Digital was to run a Matrix-style pod agency. You would manage and rent pods based on market trends, and deal with all the weird stuff that comes with that.

Spent too much time on design and not enough on implementation. I hope to wrap this up into a funny minigame at some point in the future.

#city Prototype | Back to Top 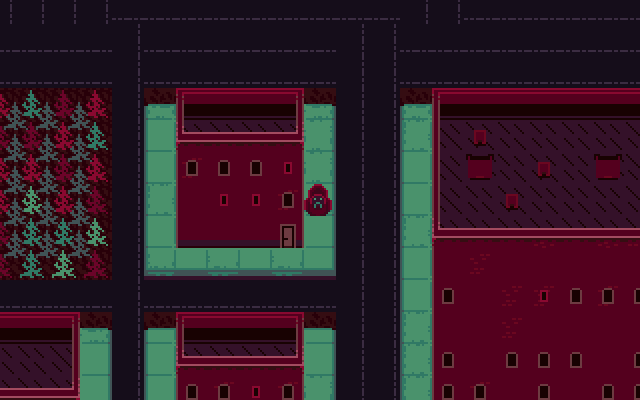 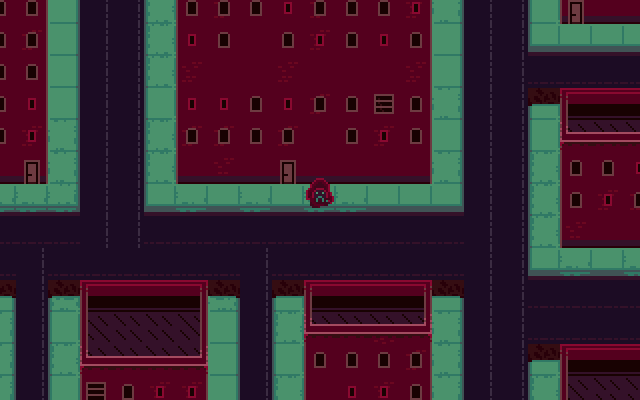 Had fun generating city blocks and abandoned buildings, and practicing my pixel art. I should tie up some of my past jam prototypes into a bigger project one day.

I've got a nice base for a future game, and found some bugs in my engine while I was at it - calling this 7DRL a personal success even though my entry is incomplete!

#cave-shrine Prototype | Back to Top 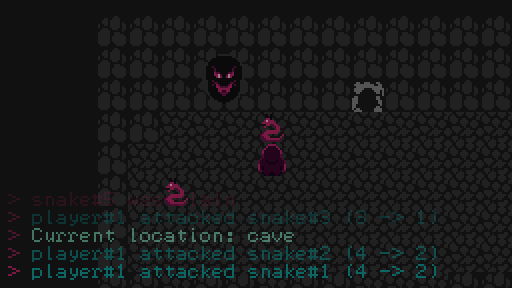 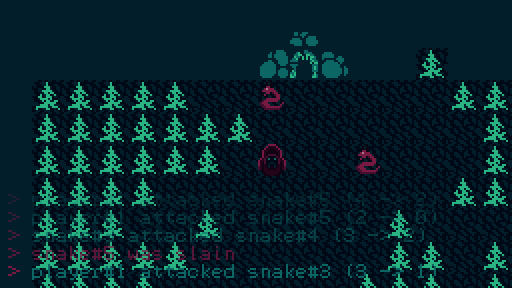 The jam's theme was Sacrifices must be made. I wanted to make a dark top-down game with multiple world areas, and a head on the cave wall that gives you missions and tells you what to do. The head on the wall should have told me to plan my weekend better :-)

Not my best game jam, but it was a useful engine test and I plan to reuse some of the code and graphics in future projects. I fell out of practice doing weekend game jams in my one year break since LD40, looking forward to doing a better job at LD44.

#forest Unreleased Prototype | Back to Top 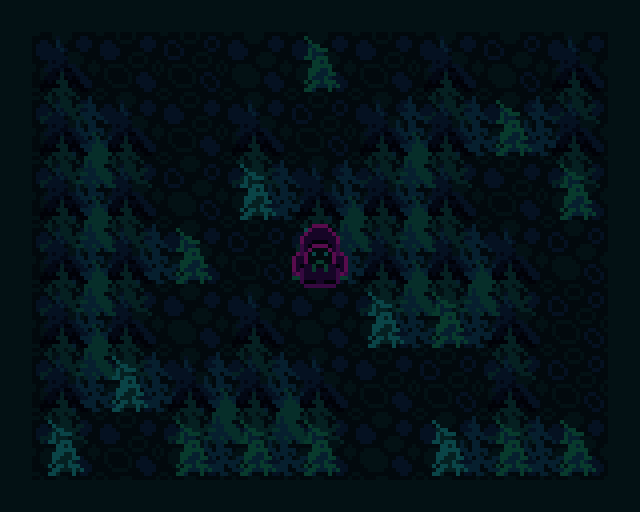 Graphical roguelike game that's set in a deep dark forest. No downloads because there isn't much to play yet.

Bad timing with this year's 7DRL, but you'll see more of this game in the future :-) 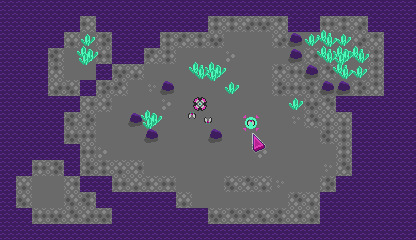 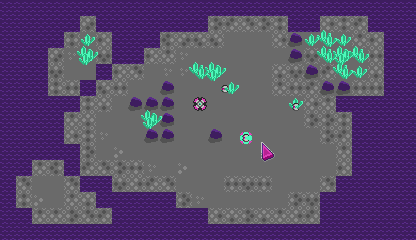 The jam theme was The more you have, the worse it is. This is an unfinished RTS where you use drones to mine crystals before the enemies (which unfortunately are not implemented) overwhelm you.

Overscoped like no other, but this was a ton of fun to work on even though I ran out of time before turning it into what I had in mind.

#pestering-peddler Prototype | Back to Top 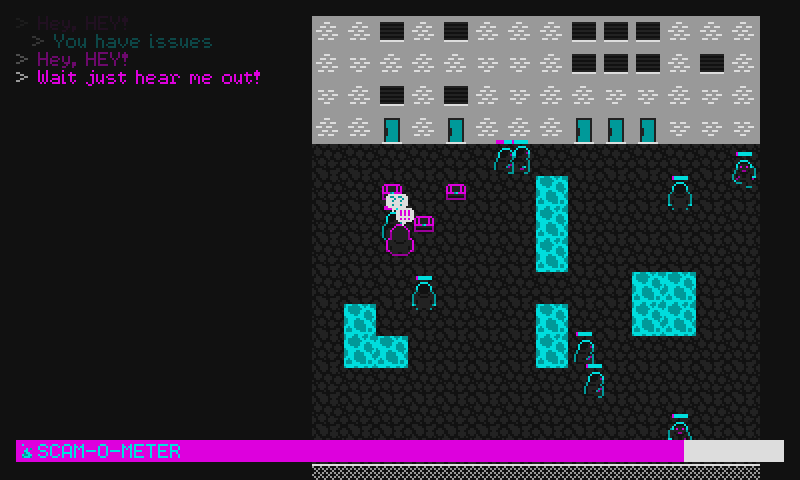 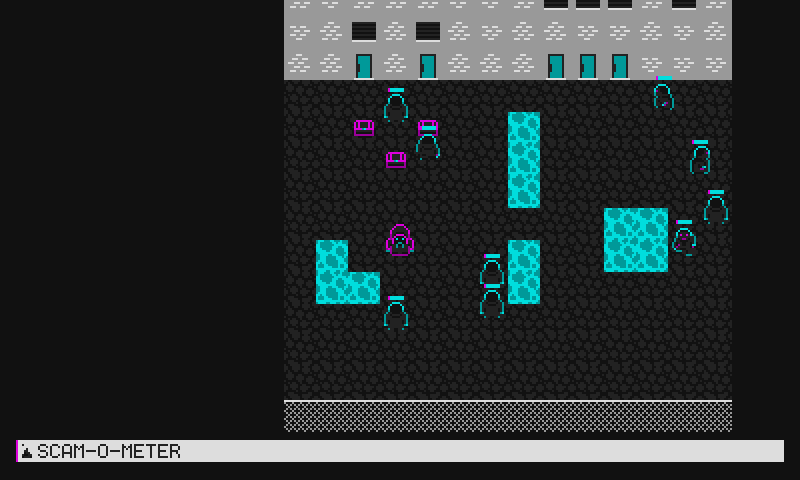 The theme was Definitely not a scam. The game is about pestering people until you convince them to listen to you, which is when you have a chance to make your pitch.

Making this was a rush, equal parts writing code and remixing in code from past and present projects to get it all done in the short 48h. 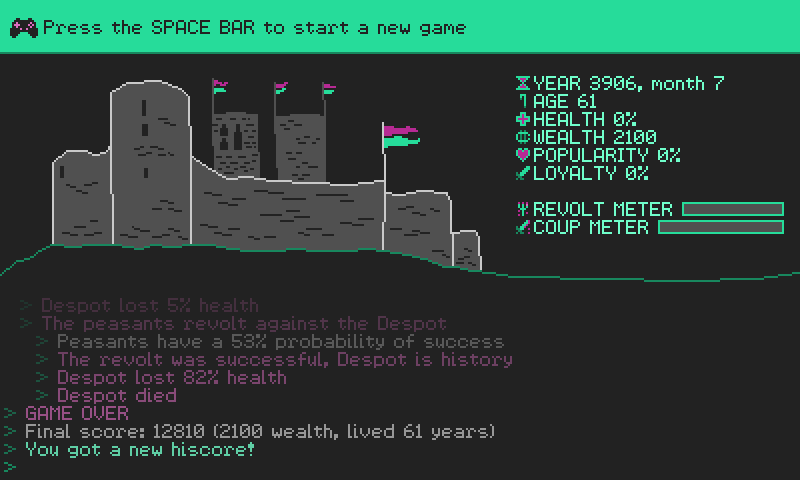 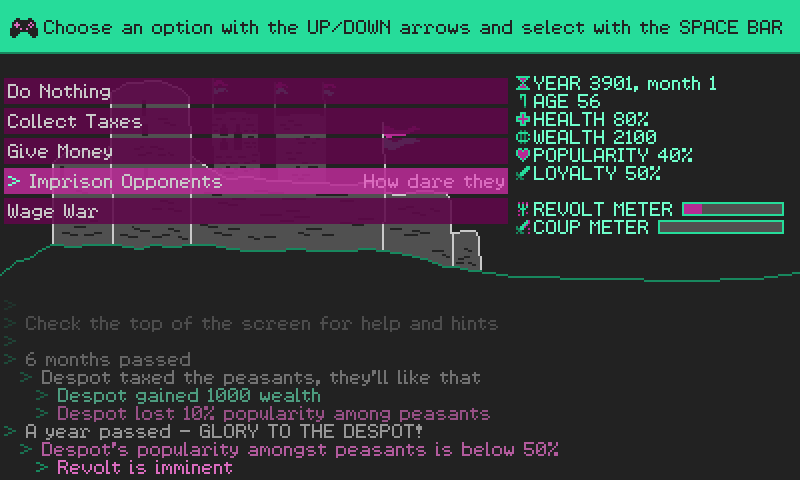 The jam theme was Running out of Power. I interpreted the theme in a different way than most and made a game about a despot whose power is waning. You interact with two factions that don't like each other: peasants and nobles. You choose an action to perform every turn, and the goal is to accumulate wealth and live a long life.

Took 72h again instead of 48, it seems to be a sweet spot for me. Focused on game design, programming, and graphics in that order, and was able to reuse some utility code from my LD38 game, which was key to moving fast. Scored 42nd place for Use of theme, take that 43rd!

#38th-century Prototype | Back to Top 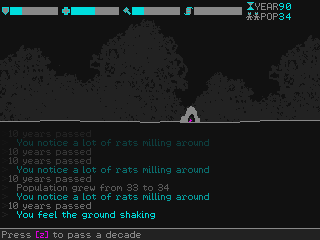 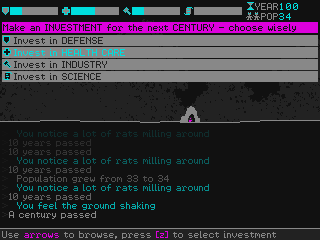 The jam theme was A Small World. 38th Century is a simple world simulation game. When a century is up, use the clues you noticed every decade to make the best investment for the century ahead (in one of defense, health care, industry, or science). If your prediction was correct, your population will be sheltered from the inevitable disasters that strike every 100 years.

Took 72h this time, but still had to cut a lot of the content and features I planned to include. Spent the first day designing instead of jumping straight into programming. Did better at reusing code from older games, and tying this into a game with a beginning and an end.

#space-station-plunder Prototype | Back to Top 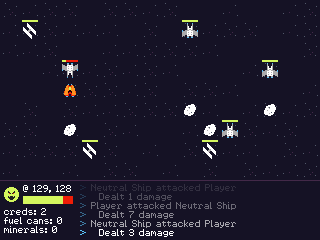 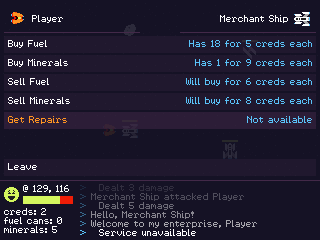 A space roguelike game made in seven days. Fly your ship around different space sectors, battle other ships, mine asteroids, and trade with merchants.

Planned all the week's work in detail before starting, which really paid off even though I still over-scoped.

The theme was One Room. Get a room at Motel 37 and run a few errands.

Used my time better than before and got something a lot closer to a real game with goals and content. I wish I'd have taken 72h to work on it, the extra day would have made a huge difference.

#church-2 Prototype | Back to Top 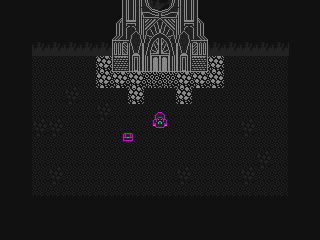 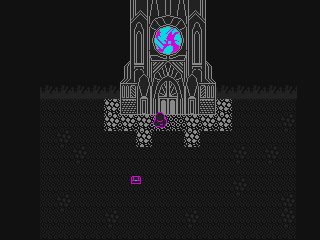 Every participant was assigned a random theme, mine was Church 2.

This was the first time I used the Entity-Component-System architecture that I've been working into my game engine. Got a little more done than at Ludum Dare 36, but all you can really do is walk on the map and trigger some events. Spent way too much time drawing the cathedral!

#rushed-dinosaur-dare Prototype | Back to Top 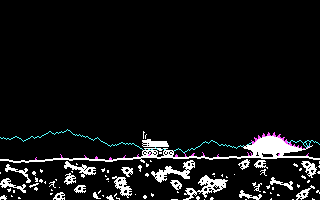 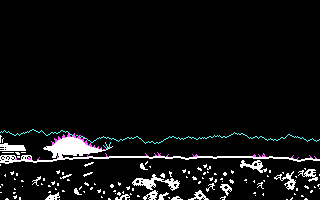 The jam's theme was Ancient Technology. A CGA-style game (320x220 in 4-color mode) where you travel back in time to annoy a Stegosaurus. Gameplay inspired by the classic Moon Patrol.

This was my first 48h game jam, learned first-hand how short that really is :-) It was also my engine's first new project test in years, so this game attempt lead to a lot of improvements down the line.