I wanted to play around with Arduino for a long time, and the Arduboy handheld was the perfect excuse to get started! My Hello World program is ArduboyMouse, a sketch that lets you use the Arduboy as a 2-button mouse.

Check out the excellent Quick Start Guide on the community forums, it covers everything.

I tried the Arduino IDE from the Ubuntu 16.04 repo, but version 1.0.5 is too old and it does not support the library fetching functionality mentioned in the Quick Start guide.

The avr-gcc and avr-dude tools in the repo are about as recent as those bundled with Arduino 1.8.1 though, which is great because in the future I would like to build Arduboy games from the command line without the IDE.

On Linux, Arduboy shows up as a serial device under /dev/ttyACM0. However, only the root user and the dialout group have access permissions to it, so trying to upload a sketch with the Arduino IDE will fail. According to the Debian Wiki, the dialout system group is for full and direct access to serial ports, which sounds like exactly what we need.

The solution is to add your user to this group:

You can confirm the change by running the groups command after logging out and logging back in again.

While researching this issue, I found an article that suggested changing the permissions on /dev/ttyACM0 instead, to allow rw by everyone. That does not work for the Arduboy though, because the serial device is re-enumerated when the board is reset and put in flash mode, which loses the permission changes you made on the file.

Using the Arduboy as a HID Mouse#

This is very easy thanks to the Arduino HID Mouse and Keyboard libraries available on ATmega32U4 boards like the Arduboy, which present themselves as USB HID devices.

Mouse.move moves the cursor by the amount specified relative to its original position.

Displaying Images on the Arduboy#

The Arduboy's framebuffer has an interesting format fitting a 1bpp (bit-per-pixel) screen, where each byte encodes a vertical strip of 8 pixels. Strips then flow horizontally left to right, and wrap to the next row of 8-pixel strips.

For example, here is a sprite, with its screen-format pixel strips highlighted, and finally the bytes as they are in memory.

I wrote a Python 3 script to convert normal RGB images to this format:

Next up is building projects directly with Makefiles and avr-gcc, and making a few small games. Fun times ahead! 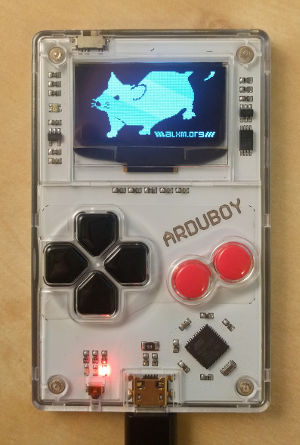